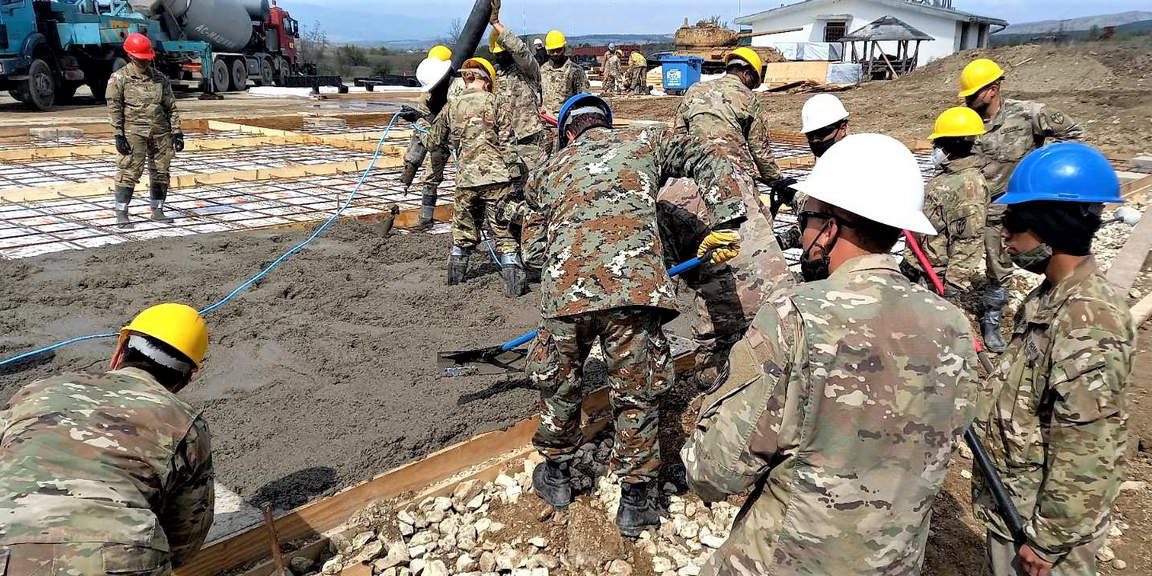 During the period from 15.03 to 15.05 year 2021 the Army Engineer Battalion of the Republic of North Macedonia (EngB.) and the 15. Engineer combat Battalion of the US Armed Forces (15.engb/US AF) realized a mutual training at the “Krivolak” barrack square (BS). With this mutual training both of the units improved the “Krivolak” BS capacities and increased the possibilities for units training and drill operations of our Army with the NATO partners.

During the realization of the project, an excavation, leveling and tamponing of the airstrip were done; target storage was built at the Dzidimirci location of “Krivolak” BS; 21 (twenty-one) Stationary Armored Targets were made; organization of moving armored target pits was done at the Dzidimirci existing location of “Krivolak” BS; the existing road infrastructure was repaired and new “Krivolak” BS sections were made and an UAV airstrip was built. This projects also encloses the construction of the “Krivolak” BS tour in the garrison troops in Stip. A new section was penetrated, the existing road sections were repaired, and the total length of the tour is 62 kilometers. Members of the 15.engb/US AF participated in the tamponing of the newly penetrated road section with their forces and means (self-unloading motor vehicles).

The President of the country and Supreme Commander, HE mister Stevo Pendarovski, the Chief of Army General Staff, Lieutenant General Vasko Gjurchinovski, the US Ambassador in the Republic of NorthMacedonia, misses Kate Burns, the Defense Minister, misses Radmila Shekerinska, the Commander of the Operations Command, Brigadier General Pavle Arsoski and the Commander of the US 21st Theater Sustainment Command, Brigadier General Christopher Mohan all paid a visit and made their rounds during the mutual training of the Engineer Units at “Krivolak” BS. The commander of 15.engb/US AF, Lieutenant Colonel Jessica Goffena, also paid a work visit to OC and EngB.

The Engineer Battalion has been deployed for two years in a row at the “Krivolak” BS with the aim of realizing the project for its transformation into a regional training center. During the last two months, these activities have been intensified even more. With the training that reached the highest professional and military level, the EngB. and its long-time partner 15.engb/US AF exchanged knowledge and experience about the work, which improved the interoperability according to NATO standards. A great opportunity was created for getting familiar with the tactics, techniques, and procedures of making military decisions on a platoon level. Various trainings were done as well as getting familiar with the tactically-technical characteristics of engineering means that both units have. Preparations were also made by creating optimal conditions for the realization of the “Saber Guardian 21/Decisive Strike 21” drill, which starts on 17th of May, year 2021 at “Krivolak” BS.