Celebrating the 21st May – Day of the 4th MIBn 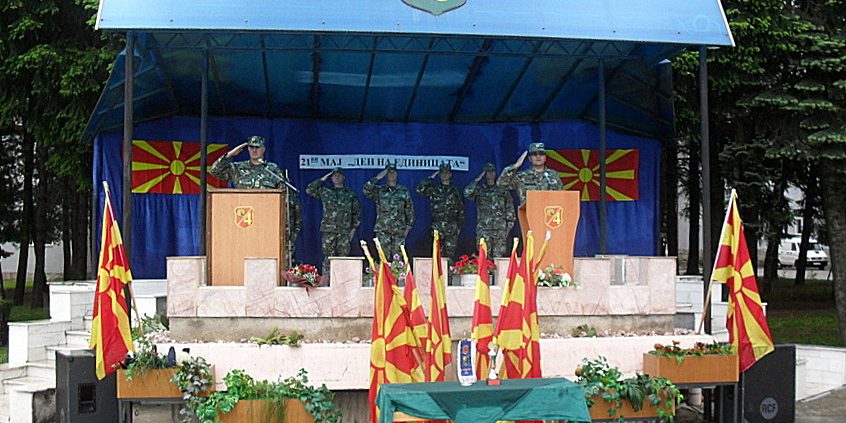 Today, at the military barracks “Chede Filipovski – Dame” in Kichevo, with a military ceremony the 4th Mechanized Infantry Battalion (4th MIBn), as a unit which maintains the tradition of the formation of Kicevo-Mavrovo partisan detachment, celebrated the 21st May, Day of the unit.

At the ceremony, Commander of the 1st Mechanized Infantry Brigade (1stMIBde), Brigadier General Zoran Mileski and the Commander of the 4th MIBn, Lieutenant Colonel Boro Latkoski gave appropriate speeches and expressed congratulations on the holiday. They also gave a historical overview of the unit and its engagement in the past year, as well as its current engagement in securing the south border.

On the occasion of the Day of the Unit, incentive measures were awarded at the ceremony and the best platoon of the battalion was chosen, and in the past few days an action for voluntary blood donation took place.

The ceremony was attended by the JOC Chief of Staff, Brigadier General Azim Nuredin; Brigadier General Zoran Mileski, Commanders of units part of the 1stMIBde, state government representatives and representatives from the public services, and the local government from the area of responsibility of the unit, as well as legal entities and individuals with which the unit cooperates.

With the establishment of the ARM in 1992, 21stMay was marked as the Day of the units stationed at the military barracks Kichevo, the 13thinfantry brigade and the 2ndmechanized infantry brigade, which were the ones to preserve the tradition of celebrating this important date in history of the National Liberation War.

By a decree of the President of the Republic of Macedonia and Supreme Commander of the Armed Forces, Dr Gjorge Ivanov, 21st May is set as the Day of the 4thMIBn, as a unit which maintains and cherishes the tradition since the formation of the Kicevo-Mavrovo partisan detachment.