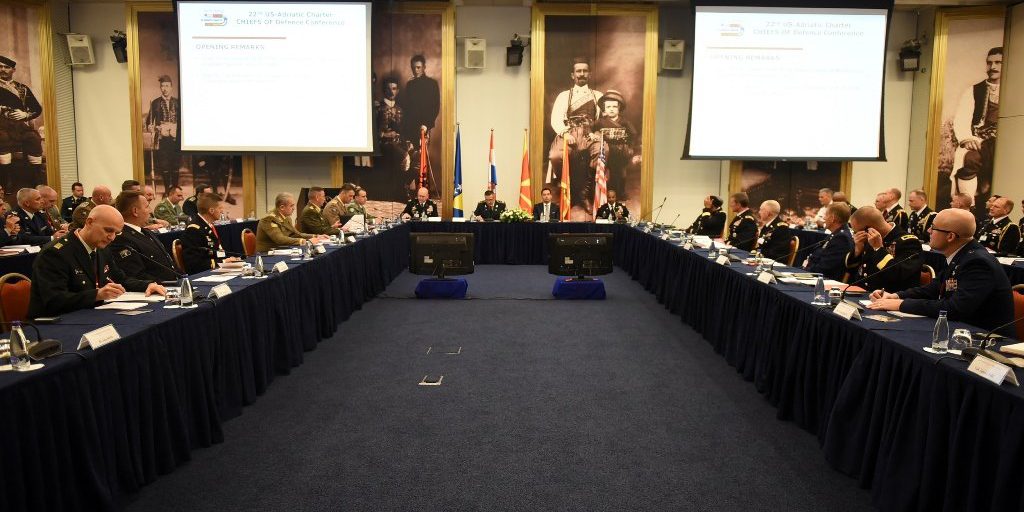 “The Macedonian Army has been fully committed to regional and international security as if being a full-fledged NATO member, which completely reflects Macedonia’s strategic objective to become part of the Euro-Atlantic structures”, Chief of ARM General Staff, Major General Vasko Gjurchinovski said at the 22nd conference of chiefs of staff of the countries-members of the US-Adriatic Charter (A5), held today in Budva, Montenegro.

Among other things, addressing the highest military leaders present at the conference, whose topic is ‘Strengthening national capabilities to enhance NATO readiness’ General Gjurchinovski noted that Macedonia had increased in participation in NATO-led missions by 20 per cent and that it had been committed to complete the reform process aimed at meeting the goals of the strategic operative review in order to achieve full interoperability of ARM with NATO standards.

After the discussions, the chiefs of A5 army staff signed a memorandum of understanding for training and exercises in the member countries and a joint statement pledging to further enhance their capabilities and all member states to join NATO in an attempt to improve regional security.

General Gjurchinovski held an official meeting with Lieutenant General Stephen Twitty, Deputy Commander of the United States European Command, during which mutual cooperation was emphasized and the US Army support for Macedonia’s efforts to integrate in NATO. This mutual cooperation can be seen through joint trainings and exercises but also through participation in peace missions.

Also, during the conference, General Gjurchinovski is going to meet his counterparts from the region in bilateral meetings, including the Croatian Armed Forces CHOD, General Mirko Shundov; Lieutenant General Senad Mashovic from Bosnia and Hercegovina; Brigadier General Bardil Kolchaku from Albania; the host , CGS from Montenegro, Brigadier General

The ARM has repeatedly confirmed its commitment to the founding principles of the US-Adriatic Charter, which is prosperity and Euro-Atlantic integration of the countries in the region.

The conference was attended by high military representatives of the Slovenia army and the Kosovo security forces, as observers, and also by commanders or deputy-commanders of US National Guards (NG), partners of A5 Armies: Iowa NG, Maryland NG, Mein NG, Vermont NG, Minnesota NG, Ohio NG, Colorado NG and New Jersey NG, in the role of guests.

The agreement to form the US-Adriatic Charter, was officially signed in 2003, which obliged

the USA as a patron, Macedonia, Albania and Croatia through an institutional framework to improve regional defense cooperation. In 2008, the initiative was joined by Bosnia and Herzegovina and Montenegro, whereas Serbia, Kosovo and Slovenia have an observer status.