You are here:
GENERAL STAFFMISSIONS 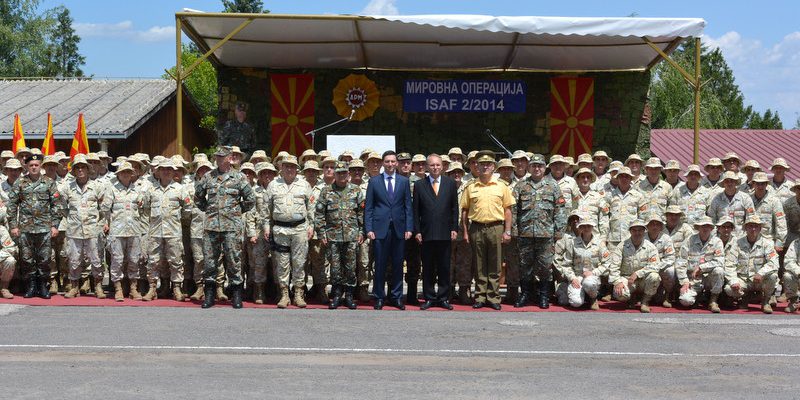 Today, the 3rd of July, 2014 (Thursday), at the military barracks “Boro Menkov” in Kumanovo, there was an official ceremony for the ARM contingent. The contingent consists of personnel of the 1st Mechanized infantry brigade (1MIBde) and it will take part in the ISAF peacekeeping mission in Afghanistan.

There were many distinguished guests at the ceremony for the ARM contingent’s leaving for ISAF mission, including the Minister of Defense PhD Zoran Jolevski, Chief of GS of ARM Lieutenant General Gorancho Koteski, State Defense Secretary Sasho Stefanoski, distinguished representatives from the MoD and GS of ARM, local government officials, peacekeepers’ relatives and other guests.

Minister Jolevski, said in his speech that the Republic of Macedonia had been successfully taking part in the ISAF mission for twelve years and that Macedonia was proud of it as well as with the peacekeepers who had taken part in the previous missions and the ones who were going to Afghanistan on this rotation. He added that the Republic of Macedonia had demonstrated that it deserved to be a part of the Alliance and the Macedonian Army was ready to take the responsibilities of the NATO membership. Minister Jolevski emphasized that taking part in this peacekeeping mission was another opportunity to demonstrate and confirm the skills, the knowledge and the professionalism in every assigned task. He also said: “That you have superb training is not only our opinion, but it has been acknowledged by all our partners in ISAF mission and by our NATO partners”.

The Contingent Commander Lieutenant Colonel Ali Hajro, said in his speech that the peacekeepers of this contingent had a responsible task which demanded serious approach and he promised that as ARM personnel they would diligently represent ARM with great integrity.

In the seventeenth rotation of the ISAF peacekeeping mission in Afghanistan, ARM will be represented by 150 personnel of the Mechanized infantry company of the 1stMIBde, and the senior national representative deployed to the ISAF Headquarters in Kabul.