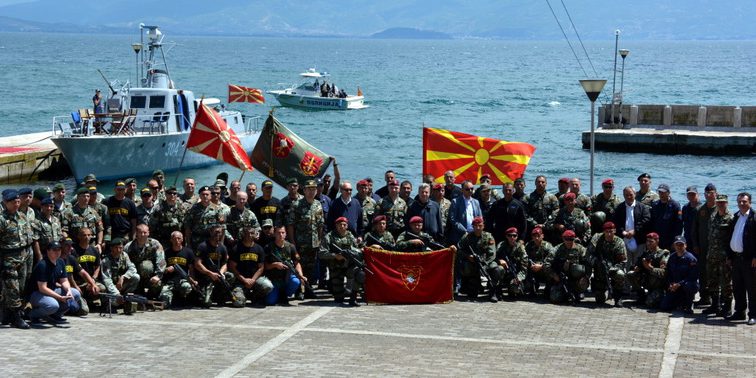 Today, July 16th, in Radozda, Struga, a methodical, demonstrational and tactical exercise, “Neutralizing an enemy vessel” was carried out. The exercise was attended by the President of the Republic of Macedonia and Supreme Commander of the Armed Forces, Gjorgje Ivanov, PhD, the Minister of Defence, Zoran Jolevski, PhD, the Chief of GS Lieutenant General Goranco Koteski, the commander of the Special Operations Regiment Brigadier General Vasko Gjurcinovski and other dignitaries.

The exercise was characterized by a fictional scenario in which a terrorist group by a neighboring country enters the Republic of Macedonia by water and intends to cause unrest and to merge with certain parts of the country’s population.

The members of the Special Operations Regiment (SOR), in coordination with the Air Brigade, performed the operation “Harpoon” demonstrating more activities from the contents of the training on water, such as: diving training, overcoming obstacles and rescuing a drowning victim. Before the exercise, the diving and other equipment and weapons for combat action on water were presented to the guests.

“What we have seen is impressive and we along with the ARM will do everything in our power to provide you with the best conditions,” the Minister of Defence of the Republic of Macedonia, Zoran Jolevski told the members of the regiment.

The particularity of this exercise stems from the need for good coordination in the preparation, organization and execution of an exercise of this kind. We wanted to show with this exercise the coordination between the Army and Ministry of Interior, General Koteski added.

The commander of the special operations regiment, Brigadier General Gjurcinovski, estimated that these operations are very high risk and require a high level of training and preparation in order to respond successfully. He also stated that this exercise demonstrated the overall competence and combined capacity to respond to any type of threat with joint support and collaboration of the air and land military forces.
To perform this exercise, the members of the Army over the past few days were preparing at the Water training center in Ohrid.