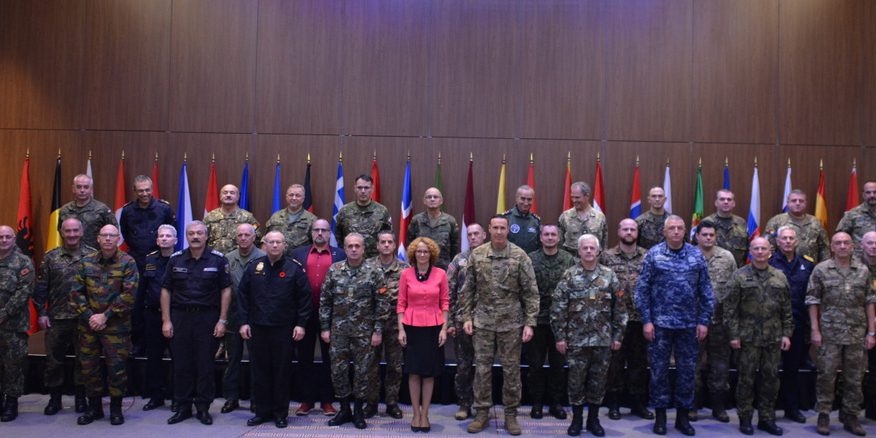 NATO Military Committee (MC) welcomes the progress of the Republic of Macedonia towards NATO membership, which is now more certain, as well as the commitment to shared values – Deputy Chairman of NATO Military Committee, Lieutenant General Steven Shepro said in his introductory remarks at the opening of MC session in Skopje.

The Deputy Chairman of the NATO Military Committee welcomed the participation of ARM members in peace support missions and their contribution towards the improvement of international security. “We encourage you to continue with these reforms, and we will continue to work closely with you in further developing your defence capabilities in accordance with NATO standards,” General Shepro said.

Addressing the permanent military representatives of the NATO Military Committee, Defence Minister Radmila Shekerinska said: “NATO’s highest-level activity, such as the permanent session of the NATO Military Committee, is held for the first time in Skopje. “This is an overture to what it will mean for the Republic of Macedonia to be at the table for decision-making with NATO allies on the major issues of today”, Shekerinska said.

The Minister also emphasised her confidence that NATO membership of our country would have positive effects.

“The Army of the Republic of Macedonia is firmly committed to fulfilling the criteria for NATO membership. We worked hard, contributed to building world peace and the fight against terrorism, and our commitment today and, I believe, tomorrow, will remain unchanged – a full-fledged NATO membership”, said ARM Chief of Staff, Major General Vasko Gjurchinovski, in his address.

At the meeting, the permanent military representatives of the NATO Military Committee will be briefed on the achieved level of reforms and the development of the capabilities undertaken by the Army of the Republic of Macedonia in accordance with the Strategic Defence Review, in order to develop more efficient professionalism and readiness to fulfill the requirements for NATO membership.

This is the first visit of the Military Committee, NATO’s highest military body to Macedonia, in the format of a permanent session, which comes at the invitation of the Minister of Defence.

The support of the NATO Military Committee in the accession process is important as it is the primary source of military advice about the North Atlantic Council and to both strategic commanders (the Supreme Allied Commander Europe, and the Supreme Allied Forces Transformation Force Commander), and it serves as a link between NATO’s political leaders and the two strategic commanders.