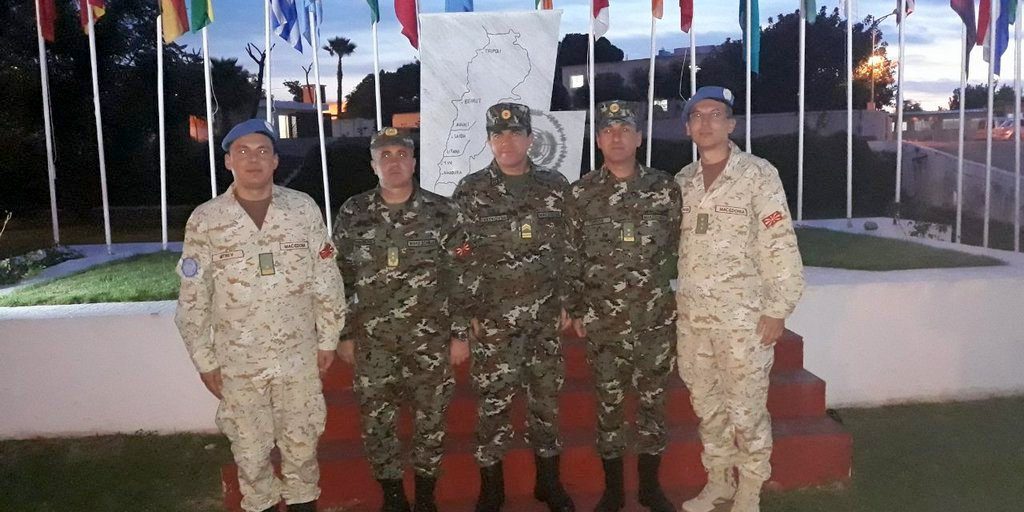 The Chief of the General Staff of the Army of the Republic of Macedonia, Major General Vasko Gjurchinovski is on a two-day visit to the mission UNIFIL in Lebanon.

After almost 12 years of participation of our peacekeepers in the mission UNIFIL, this is the first visit of a delegation from the Republic of Macedonia to this UN- led mission, so-called „Blue Helmets“.

Upon his arrival, the Chief of the General Staff of ARM, Major General Vasko Gjurchinovski was welcomed with military honors at the main Headquarters of UNIFIL, at the military base Naqoura, which is in the vicinity of the border between Lebanon and Israel. During his visit General Gjurchinovski had a working meeting with the Head of UNIFIL mission and Force Commander, Major General Stefano Del Col from the Italian Army, and the Deputy Head of the mission Pakistani Imran Riza.

At the meeting unselfish commitments and professionalism of the Macedonian representatives in the mission was pointed out, and at the same time gratitude was expressed for the active contribution of the Army of the Republic of Macedonia to the mission, aiming to build world peace.

As the number of countries participating in the mission increases, the credibility of the mission itself will also increase, and the new participating countries will contribute to the exchange of experiences between nations, building mutual tolerance and promotion of world peace, said General Gjurchinovski at the meeting.

He also emphasized that the strategic aim of ARM has been and will continue to be dedicated building of world peace by participating in peace support operations in countries which strive towards global security and comply with international standards and norms.

During his stay the ARM Chief of General Staff visited the Joint Operations Center of UNIFIL, where a Staff Officer of ARM is on duty. During the visit the General was also briefed on the situation in Sothern Lebanon and its surrounding area, as well as the future challenges of the mission.

The following day, General Gjurchinovski will visit Sector West Headquarters, where in September for the first time this year, the Republic of Macedonia deployed two staff officers who carry out their task and duties as part of the Italian contingent. During the visit the General will also meet with the Commander of Sector West, Brigadier General Diodato Abagnara.

The Republic of Macedonia started its contribution to this UN-led peace support mission in Lebanon, with the passing of the Decree by the Assembly of the Republic of Macedonia on 27th April 2007. The decree was put into effect on 16th May 2007 and our contribution started when a member of the Army of the Republic Macedonia was deployed as Staff Officer at the Joint Operations Centre in Naqoura in Lebanon. Since then the Macedonian flag has been flying in Lebanon for 12 years, marking the presence of our “blue helmets” in the mission, equal with other countries in the United Nations, supporting peace in this part of the world.

Currently 42 UN countries participate in the mission UNIFIL in Lebanon with about 10600 peacekeepers. The UNIFIL mandate, under UN Security Council Resolution 1701, is supporting peace in southern Lebanon, preventing possible conflict between Lebanon and Israel and mediating negotiations between the governments of these countries in order to achieve the desired goal – peace and stability in the region.