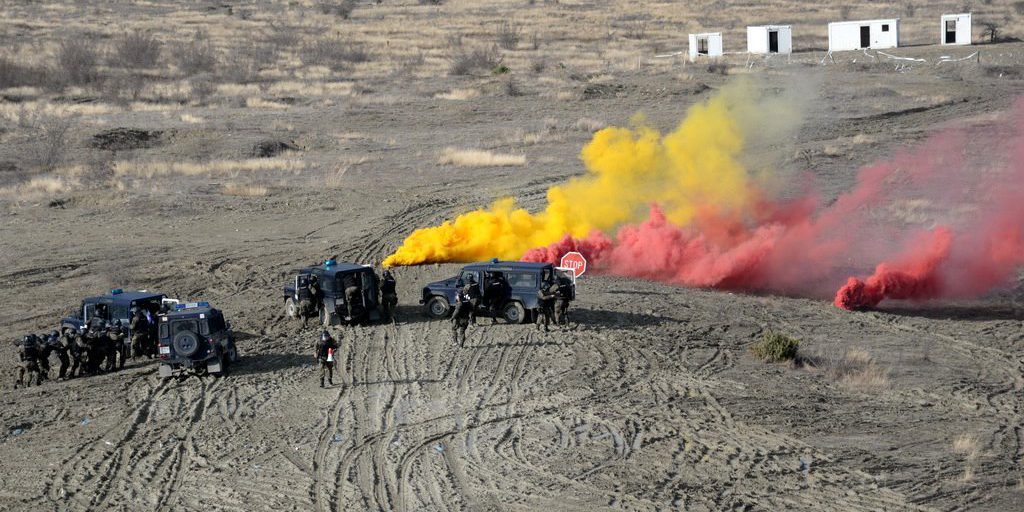 Today at the Army Range Krivolak the members of the ARM and MOI, who took part in the joint exercise “Autumn Storm-18”, demonstrated a coordinated approach in dealing with crisis management situations and procedures.

On the Distinguished Visitors Day, the special units of the ARM and the MOI, with the support of the helicopter units, the military police, the infantry units, as well as the Protection and Rescue Directorate and the Crisis Management Center, showed their potential for effective dealing with various situations. At the same time, several exercises were demonstrated: breaking into a room, attack on a terrorist camp, execution of an attack, ambush, dealing with civil unrest during a hostage crisis, and other procedures.

After the completion of the demonstration exercises, the Minister of Defence, Radmila Shekerinska, had a speech, in which she congratulated all those who were involved in the realization of the exercise, noting that today all four institutions showed that they know what they are doing, know how to go ahead, know what should be additionally made, and know that Macedonia expects a lot from them.

The ARM Chief of General Staff, Major General Vasko Gjurcinovski, expressed his congratulations and pointed out that the participants in the exercise showed that with the expertise and the readiness with which they performed difficult and complex tasks, they have the capacity to jointly and effectively deal with the security challenges. He stressed that this exercise is an excellent start for joint efforts to achieve a high level of training and, above all, mutual cooperation.

Interior Minister Oliver Spasovski stated that the joint engagement is a great example of quality cooperation that is, generally, a feature of the relations between our institutions.

The exercise “Autumn Storm-18”, which took place in the period from 8th to 13 th November, is the first major successfully realized project within the mutual cooperation between the primary institutions responsible for the safety of the citizens of the Republic of Macedonia. At the exercise, members of the Army of the Republic of Macedonia from the composition of the Special Operations Regiment (Special Operations Battalion and Ranger Battalion), the Joint Operations Command (units from the Air Force Brigade, the Military Police Battalion and the First Mechanized Infantry Brigade), together with members of the Ministry of Interior from the Rapid Deployment Unit, the Special Task Unit and the Helicopter Unit, with the support of the Crisis Management Center and the Directorate for Protection and Rescue, carried out exercises activities aimed at promoting interoperability and crisis management in response to modern threats.

The Distinguished Visitors Day was attended by the Minister of Defence, Radmila Shekerinska, the Minister of Interior, Oliver Spasovski, the ARM Chief of General Staff, Major General Vasko Gjurchinovski and other senior guests, directors and heads of crisis management institutions and the Ministry of the Interior, ARM generals, defence attachés accredited to the Republic of Macedonia, representatives of the ARM and MOD GS, commanders of the ARM commands and units.