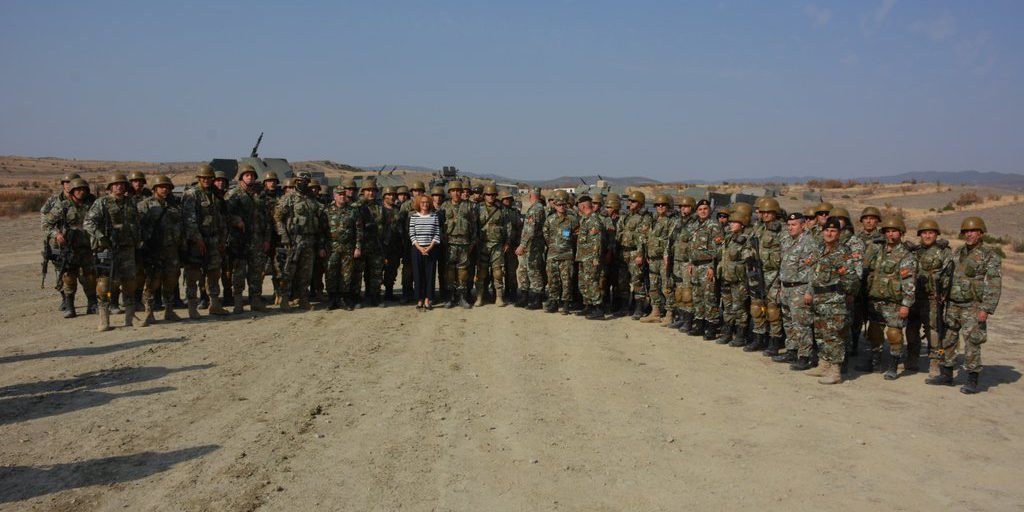 The members of the ARM declared Military Police company, on the Distinguished Visitors Day at the exercise “Macedonian Flash-14“, demonstrated their level of combat readiness at the Training Area “Krivolak”, and with this activity the NATO Level 2 Operational Capabilities Concept Evaluation for this declared unit of the ARM has finished.

The Minister of Defence of the Republic of Macedonia, Radmila Shekerinska, the Chief of ARM General Staff, Major General Vasko Gjurchinovski, ARM generals, representatives of the Association of Defence Attachés accredited to RM and other distinguished guests had an opportunity to see the combat procedures and situations evaluated during the exercise “Macedonian Flash-14”, which are based on a fictional scenario during a peacekeeping operation.

After the demonstration, the Minister of Defence of the Republic of Macedonia Radmila Shekerinska congratulated the partcicipants in the exercise on their performance and also said that the ARM members have always shown their best abilities which is an argument in favour of demanding and providing better conditions for the ARM.

Previously, the JOC Commander Major General Pavle Arsoski, addressing the guests, stresssed that the main objective of the exercise “Macedonian Flash-14” was achieved with the successful evaluation of the declared units of the ARM.

The Director of the exercise “Macedonian Flash-14”, Lieutenant Colonel Igor Manasovski also highlighted that this exercise represents the utmost demonstration of the combat readiness of the Military Police declared company, as well as its capability to participate equally in NATO-led peacekeeping operations.

The exercise “Macedonian Flash-14” is another great success of the ARM and a confirmation that NATO standards have been achieved.

The evaluation of the Military Police declared company and the Light Maneuver Hospital – Role 2 was conducted in accordance with NATO Level 2 Operational Capabilities Concept and it was carried out by national evaluation teams supported by evaluators from Bosnia and Herzegovina and Serbia. The evaluation process was monitored by a NATO Allied Joint Force Command Naples team, ARM evaluation team and other monitors from various NATO commands.

Over the course of the previous day, the commanders of the evaluated units were informed about the initual results from the NATO Operational Capabilities Concept Evaluation which was in accordance with the demonstrated capabilities of the members of the units.

During the exercise “Macedonian Flash-14”, there was also internal NATO Operational Capabilities Concept Evaluation of the declared Light Maneuver Hospital-Role 2.